Ravenclaws are wise, witty and clever:

What’s not to love?

Given it’s the home of those with a ‘ready mind’, Ravenclaw house could seem a little intimidating – but don’t let that love of learning fool you. Ravenclaws are naturally curious, welcoming of eccentrics, and they have one of the most interesting house ghosts at Hogwarts. But just in case you need more convincing of the benefits of a Ravenclaw romance, here’s the run-down…

It would be a ‘wise’ choice

‘Wise old Ravenclaw’ is how the Sorting Hat described this house’s founder, and that wisdom certainly filtered down to most of Ravenclaw’s students. If you’re wise, you’re known for good judgement, which is definitely a quality you want in a partner (reflects well on you, that). And okay, while there are some Ravenclaws who buck this tendency towards wisdom, most of them are pretty shrewd.

When you’re in need of advice and comfort, you could do a lot worse than seek out a Ravenclaw. They know what to say, when to say it, and they’re never afraid to speak their minds.

On top of that, most Ravenclaws aren’t worried about keeping their knowledge to themselves.

From Luna Lovegood to Garrick Ollivander to Head of House Professor Flitwick, Ravenclaws are generally happy to share their experiences, which is always good for a relationship. Plus they know so much stuff. You’d never have to read a textbook again, and just think how much easier it would be to complete a crossword or score 100 per cent in a quiz with a Ravenclaw at your side.

In his ‘Welcome to Ravenclaw’ speech (which you can only hear if you have been sorted into Ravenclaw), prefect Robert Hilliard talks about Ravenclaw’s people being ‘the most individual’ of any Hogwarts house. In Ravenclaw Tower, individuality – even eccentricity – is a trait to be prized. As free thinkers and free spirits, Ravenclaws push the boundaries of magic in a multitude of ways: they’re happy to experiment, welcoming of new ideas, and the absolute last people to dismiss anyone for being a little bit different. There’d be no need to hide your bad habits or strange tendencies from a Ravenclaw – they’d accept you for who you are, quirks and all.

Most Ravenclaws are honest – to a fault

Luna was the epitome of this very Ravenclaw trait. Her tendency to share her observations without any element of sugar-coating might have made her appear blunt, but she never did it out of cruelness. She doesn’t mean to do anything other than be honest.

Ravenclaws don’t tend to gossip or say things out of malice, but they will always tell the truth. And honesty makes for healthy relationships – even if it is a bit close to the bone sometimes.

They’ll impress you with their great wit

With wisdom comes wit, and Ravenclaws would surely be great company at a dinner table. Not only would they have lots of fascinating stuff to talk about, but as Hogwarts’ quickest thinkers they’d be great conversationalists. We doubt you’d ever run out of things to say to a Ravenclaw, and given their willingness to debate every question they’d probably treat every one of your sentences with the utmost respect – although we suspect they’d prefer deep and meaningful discussions to celebrity gossip. After all, you can’t even get into Ravenclaw Tower without answering a challenging question (which, incidentally, means hanging around outside Ravenclaw Tower is a great place to pick up some witty repartee.)

They’re proud of themselves

Ravenclaws are obviously clever, the Sorting Hat sings about it all the time. But it’s more than that. Enthusiasm for learning is, sadly, not always so highly prized – but that’s the point of Ravenclaw. They’re unashamed of their cleverness, proud to be part of a house that values it, and eager to share their knowledge with as many other people as will listen. Such intellectual curiosity makes Ravenclaws extremely interesting partners, and – who knows – they might spur you on to greater feats of discovery, too.

Wishing one and all very Magical Holidays from snowy Hogwarts! 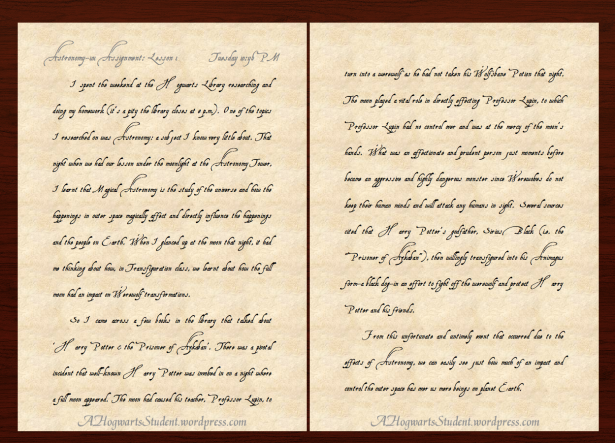 I spent the weekend at Hogwarts Library researching and doing my homework (it’s a pity the library closes at 8 p.m.).  One of the topics I researched on was Astronomy: a subject I know very little about.  That night when we had our lesson under the moonlight at the Astronomy Tower, I learnt that Magical Astronomy is the study of the universe and how the happenings in outer space magically affect and directly influence the happenings and the people on Earth.  When I glanced up at the moon that night, it had me thinking about how, in Transfiguration class, we learnt that the full moon had an impact on Werewolf transformations.

So I came across a few books in the library that talked about ‘Harry Potter & the Prisoner of Azkaban’.  There was a pivotal incident that well-known Harry Potter was involved in on a night where a full moon appeared.  The moon had caused his teacher, Professor Lupin, to turn into a werewolf as he had not taken his Wolfsbane Potion that night.  The moon played a vital role in directly effecting Professor Lupin, to which Professor Lupin had no control over and was at the mercy of the moon’s hands.  What was an affectionate and prudent person just moments before became an aggressive and highly dangerous monster since Werewolves do not keep their human minds and will attack any humans in sight.  Several sources cited that Harry Potter’s godfather, Sirius Black (i.e. the “Prisoner of Azkaban”), then willingly transfigured into his Animagus form—a black dog—in an effort to fight off the werewolf and protect Harry Potter and friends.

From this unfortunate and untimely event that occurred due to the effects of Astronomy, we can easily see just how much of an impact and control the outer space has over us mere beings on planet Earth.

As I’m muggle-born and have only recently discovered the wondrous Wizarding World, Transfiguration wasn’t something I thought to be possible.  I’m slowly restructuring my idea and understanding of the world and its capabilities as I attend each new lesson at Hogwarts.  I am still very much in complete amazement with all the promising possibilities.  There is so much to learn and I am utterly intrigued.

I would especially like to learn more about the theory in Transfiguration class.  It’s mind-boggling to me trying to wrap my head around the fact that physical objects in the world can be altered simply with magic.  How can it be so?  Just how does it work?  It is my aim to fully comprehend the theory behind Transfiguration.

Transformation, Animagus transfiguration in particular, and Conjuration are two branches I’m most excited about.  To be able to willingly transform into an animal form whenever one wishes to, and to be able to conjure something out of thin air at any given moment—that would simply be marvellous!  I am nervous about the specificity that Transfiguration requires though.  Professor Mitchell cautioned us about that during the lesson.  But what I’m most nervous about are the dangers of Transfiguration—when spells backfire or aren’t cast correctly.  Oh, what horrors a half-completed transfiguration would be!

Upon hearing Professor Penrose mention that Dark Magic would continue to corrupt our souls and our bodies from the very moment we cast our first Dark spell with a malicious intent, my initial thought was that it should be a crime to use the Dark Arts. However, after spending some time in the Hogwarts Library researching the Dark Arts, it is my belief that the Dark Arts should remain legal, save for the three Unforgivable Curses.

Although the Dark Arts encompass many spells and practices that are mainly used to cause harm to others, they are not necessarily always evil or done with malicious intent.  Jinxes and hexes, for instance, typically cause little harm to others and are many a time used by witches and wizards as practical jokes.  One such hex is the Bat-Bogey Hex whereby it turns a person’s bogeys into bats that fly out of their nose.

In addition, the Dark Arts can be used as a way to defend oneself against Dark Magic in times of desperation.  Several books in the Hogwarts Library talked about how the famed Harry Potter and Hermione Granger, and even Professor Dumbledore, used strong Dark Magic—and they are non-dark wizards.

Furthermore, Dark Magic can also be used in an effort to help others.  I read that Harry Potter used the Revulsion Jinx on the chains of a dragon to free it (and themselves) from Gringotts, and Hermione Granger used the Stinging Jinx as well on Harry Potter as a means of disguising his face when they were caught by Snatchers.

It is evident that malice isn’t always behind the Dark Arts and that Dark Magic can prove to be beneficial in certain circumstances.  However, it is ought to be emphasised to students the seriousness and grave danger of using Dark Magic.  Having said that, I still strongly believe that the Unforgivable Curses should be a crime due to their especially sinister nature.

Before the first lesson of the History of Magic, the topic of history was never a particular fancy of mine.  I must admit that this was the subject I was least looking forward to and I had dragged my feet to class.  I now realise how wrong I’ve been.

I used to think of history as nothing more than a mere memorisation of dates, facts, and events.  After all, that was how it was taught in the Muggle schools I attended—through rote learning.  It was delightful hearing Professor Becker mention that dates are not as important, that what’s more important is to understand how people have shaped history—the ideas and the messages behind their words, actions, and causes.  That captivated my interest.

History shouldn’t just be a simple recollection of the past, but as a way to learn to help the present and shape our future.  To cease the never-ending cycle of history repeating itself, to improve ourselves and become better wizards, to improve the world and make it a better place to live in, both in current times and for the future; that’s what’s essential.  A remembrance of the good-doings, of the triumphs and the bloodshed; to learn from the mistakes of the past and to keep the dark forces at bay—these are the reasons why it is necessary for students to study history.

Although I’m new to the Wizarding world and have very little knowledge of magical history, I do know that a recurrence of Voldemort and the Death Eaters would be an atrocity.  A Third Wizarding War would cause widespread devastation.

“Our roots affect who we become… Our identities are formed from the roots and up.

“…A muggle-born will grow up without the Tales of Beedle the Bard, half-bloods will know a balance of each world, whereas many pure-bloods will be at odds in the world of muggles.”

Transfiguration-101 seems to require the most amount of quill taking so far.